The End of the World -Ushuaia [Argentina]

That's it... after nearly fifteen months of headin' south, I've made it as far south as possible and precisely on the eve of the new year.  I can't believe that I can actually say, "there ain't no mo' roads".

But, in a way, it all makes sense.  I decided to go live life to the fullest, and that's going to bring a lot of interesting and a lot of crazy and even more "I always wanted to do that" kinda moments.

And so, here's my 2017 wish to you and to me and to the world (found on the garage door of the house next to my hotel for the night): 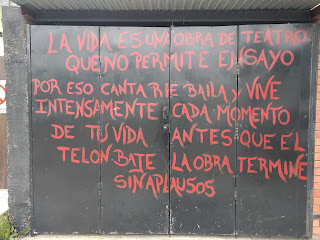 English
Life is a play that doesn't allow for practice.
So, sing, laugh, dance, and intensely live each moment of your life,
Before the curtain falls and the play ends without applause.

Happy New Year from the "End of the World"!

The story of arriving to the "End of the World":

I was 35 km (20 miles) outside of town and there was still several hours of daylight, but I wanted to stop.  I'd already done 105 km (60+ miles) for the day and there was a camping spot that was way too gorgeous to pass-up.  Plus, I wanted to enjoy my arrival into Ushuaia... I had been waiting to "roll into town" for a long time and didn't feel the need to rush... I had food and water and an ideal setting to relax a bit.

I quickly and efficiently set-up the tent and cooked dinner.  By now, this is now an easy routine for me.  I took a few minutes to sit by the river and enjoy a seldom-seen treat of dessert (in this case, some stale "new year's" bread).  Then quickly off to to bed; I was tired and wanted to get up early in the morning.

The next morning started-off with a very heavy dew; heavier than any I've ever seen.  The sun doesn't really "set" this time of year and this far south[2].  So, all night long there is always some light in the sky.  As such, I was awake at 4:30 am, cold from the dew, and with too much light to go back to sleep.

I waited, somewhat patiently, in my two sleeping bags until the sun's rays actually hit the tent and warmed things up a bit.  That didn't happen until 7 am.  Unfortunately, my phone battery was dead so there wasn't anything to do but wait...[3]

With the warm sun light hitting the tent, I ventured outside and quickly cooked breakfast.  In an amazing change of menu, I opted to not have oatmeal and went with the stale "new year" bread that was given to me the day before.... bad choice.... I quickly had an upset stomach and had to go use the "restroom".

Not daunted by the less-than-ideal morning, I started pedaling.  As I do, the warm sun disappeared into the clouds and a slow rain began.  After all, it is the Patagonia region, and weather changes faster than you can snap.

I continued past an automobile accident (in which a police truck had driven off the road), past amazing
scenery, and past rivers and lakes.  Trying to soak in all the beauty that surrounds me.  It's getting close to "end of the road" and I feel like savoring every last bit.

I continue for an hour and make it to the last 5 km... only to get a flat tire.  I can't believe it... I feel like it must be a sign or perhaps penance or maybe, just another flat tire...

So, I stop to swap out the inner-tube.  This inner-tube also has a flat... but at least I can get a complete kilometer before I have to pump again.  Good enough!  I will only have to pump a few more times to make it to town...

I arrive to town to meet the sister of a close friend.  It's the first time I've met-up with someone from "home".  It's pretty damn amazing to see a "known" face in town!  Even better, "close friend" and sister have brought me more chocolate and peanut butter than you can shake a stick at!

I hurriedly inhale the Rolos and a Snickers bar (I felt obligated as they were slightly smashed in the travel), and begin looking for a boat... to Antarctica!

A few hours, several agencies, and some sweet-talkin' later, we secure a cabin on-board a 15-day cruise to the South Georgia islands and Antarctica!  I'm going to Antarctica!!!

2.  The latitude of Ushuaia is nearly -55 degrees south... it's waaaaay down there.   -return to the story

3.  As opposed to my usual "time waster" of playing Solitaire.   -return to the story

Promote Your Page Too